I spotted an old friend looking back at me from a charity shop window the other day. Together with a case and lens, looking nice and clean, was a Praktica MTL 3 for a donation of just £20. This was a very popular and affordable system camera of its time; a fairly robust, all-manual camera with the common M42 lens mount. The MTL 3 was the second SLR that I had owned, after the Zenit EM, from around 1981. 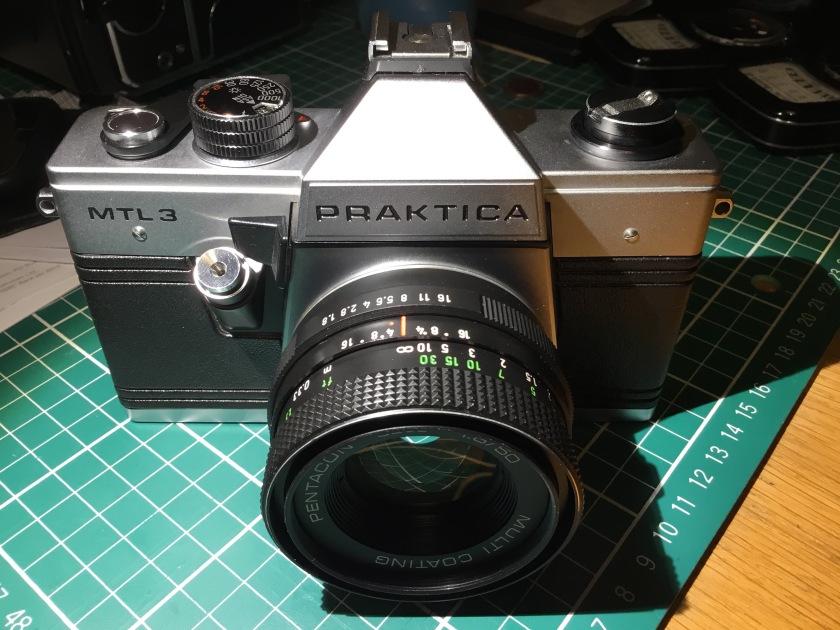 The shutter seemed fine and the wind-on was sure and solid. Unfortunately, though, there was a huge blob of dark fungus showing through the viewfinder which I could see was not on the mirror nor underside of the focus screen. This would mean that the body would need to be dismantled in order to clean it inside. Also, the lens aperture was stuck wide open which would mean a complete dismantling of the lens. The challenge was accepted.

Once back at home the lens was taken to pieces, helicoid and all, and optical groups separated. I carefully cleaned each aperture blade, a couple of which had grown an impressive coating of fungus, with cotton buds and propanol. Surprisingly, there was no fungus at all on the elements near to the aperture blades; unexpected because fungus normally loves to infest coated glass, seemingly in preference to anything else. The Pentacon 50mm 1:1.8 is a relatively easy lens to work on as it’s very simple in design; the job took about forty minutes and a working aperture was restored.

Next was the more challenging task. I needed to get in between the base of the prism and the upper side of the focus screen, which would be tricky if the prism and screen were glued together as they are in the B series (the BC1 at least). I removed the top cover after first taking off the shutter speed, wind-on and rewind assemblies as well as the flash shoe. The prism was held in place by a single clamp and I was relieved to find that the prism lifted out easily, on its own, revealing the condenser lens which sits above the focus screen. The mould blob was on the top surface of the condenser lens, at around 5mm in diameter. I carefully cleaned it with cotton buds and propanol, being especially careful not to knock the meter needle, and it was removed entirely. A very satisfying job!

Then I noticed (only with the aid of a bright light) that the eyepiece lens had some fungus threads growing. I managed to eliminate all traces of that, too, which required some more effort than expected but that’s the way it goes with that stuff; at least it did all come off and it hadn’t etched the glass as can sometimes happen.

The optics are now all clean and clear, the shutter seems to be fine and the meter works, although I need to check it for accuracy. A nice trip down memory lane.